It’s that time of year again, tax time!  The one good thing about taxes is that paying them means that I was gainfully employed last year, or at least most of it anyway.  Due to the house purchase, I am not eligible for E-Filing, boo hoo.  And alas, my printer ink froze during the move, so now I am waiting on the arrival of ink cartridges in order to print out my taxes and mail them off.  It’s always the little things, right?  I’ll be relieved to pay off some bills and have a little pocket change to take care of some repairs around here.   And hopefully a little bit left over to buy some herbs and flowers for the garden.

I am tired of deaths.  Today one of my co-workers died on a job site.  That makes five people that I personally know to die in less than the last 12 months.  We just take life for granted so often.   I know I did, before my husband died.  Every day is precious, but it is so easy to lose sight of that amongst the daily grind of ‘living’.  We hurry and scurry, spend little sound bytes of time with those that we love, and even less with those that we work with.  Phone calls and visits with friends and family get put off for a variety of reasons, always thinking in the back of our minds that we can ‘catch up’ later.  What if there is no later?  Tell the ones that you love,  “I love you.”  Hug people that you care about.  Make time to do the small things.  We won’t be perfect at it, but at least we can try.  I know that Nickelback is considered by many to be a talentless  pop machine recording group – but their song “If Today Was Your Last Day” really has a lot of meaning.   If by some miracle you’ve never heard it, check it out on YouTube, or purchase it from Amazon.  The video is very cool too.  It makes you stop and think.   Stop and think of those you love today.  You won’t regret it!

Snow days.  I never thought I would really have snow days, as in can’t leave the house due to snow.  But it happened during the end of January and beginning of February.  It was so beautiful!  Here is a photo of my country road after the February repeat snow.  As you can see, no snowplows out here, LOL!

Aside from the dog tracks back and forth through the snow, I found the snow cover breathtaking.  Little bird prints and mouse prints appeared, telling the secrets of those unseen travelers.  The snow was as light as air and soft.  Sometimes it came straight down, at other times the wind drove it nearly sideways; and always the flakes had variety – fat and fluffy or tiny and sharp and during daylight hours they sparkled like bits of glitter.  The sound of snowfall and its impact on the sounds of the world are still amazing to me.  Everything becomes muted and quiet, yet you can hear the snow as it touches tree branches, or lands on shrubbery leaves.  And thanks to being aware of the weather, I was snug as a bug in a rug inside my little house. 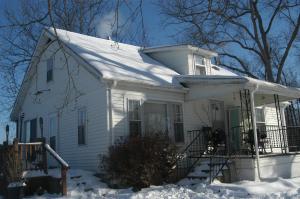 Warm and cozy inside, dazzling white and cold outside!

The natural world dresses up after snowfall, displaying patterns and beauty that we normally overlook until highlighted by the play of light against dark, color against whiteness.  Take for instance the tree limbs in the photo below.  How often do you look up above your head and notice the intricate patterns of the branches of a tree?  I know I normally don’t do it.  I am sure if anyone saw me out taking pictures, they assumed I was slightly mad as I walked under trees, craning my neck and changing my perspective on the world.

The skeletal remains of the poplar blooms always catch my eye, even without their snow dresses on.  After viewing this, I imagine that the menorah within the Temple must have somehow captured part of this beauty and delicateness.  But  the lowly poplar amongst the snow,  changed into something extraordinary – snow candelabras perhaps, or poplar snow cones?  I wonder if this beauty could be captured in an art form?  Or is it just for our viewing pleasure, to be left magnificent and wondrous just as it is found during a walk on a snowy day?    Some things I think, are just meant to be seen by us – not even captured on camera, only with the mind’s eye can they be revisited.   In this way, they become a part of who we are, that collection of memories, thoughts, images, sounds and smells that melds together to make us distinct and unique individuals.  I am thankful every time I stumble upon one of these opportunities, the little time treasures, or G-d smiles as I used to call them to my children when they were little.  In a world of uncertainty the steadfast beauty in the creation comforts me and reassures me. 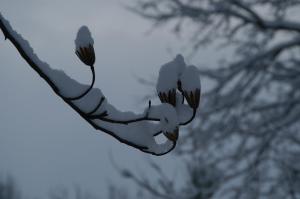 On a more humorous  note, I also have less graceful lawn adornments littering my yard.  Imagine my surprise when I came across the deer skull and vertebrate replete with antlers, a couple of forelegs, and two well-gnawed old beer cans.  Hmmm, are the dogs holding hunting parties?  Or the frozen stiff full-sized raccoon corpse.  One thing for sure, it is never boring around here!

Spring, will it ever grace us with its presence?  Winter feels very long this year, longer than the years before.  This morning after work while I was walking the Jack, the ground was frozen and crunchy, the frozen dew a shimmering kaleidescope of colors in the unexpected sunshine.  Oh, how good that sun felt and looked!  It is our first day above freezing in many weeks, and we are due another before the rain sets in.  Bulbs are peeking their heads up just a bit further now that they have shaken off their snow coats.   I wonder if we’ve seen the last of the snow for this year?  Surely we have had enough for several years in one, as we normally only get two inches or so and we’re over fourteen inches this year!  I coddle my seedlings and dream of lavender in bloom, the sunny heads of sunflowers waving in the breeze and the smell of freshly tilled earth as it is warmed by the sun.   I sure am ready, how about you?

Snuggle well and stay warm my gentle readers, until next time.

← Snowstorms and expanding personal boundaries
So, what’s with the dots in the title there? →

2 comments for “On death, taxes and the promise of Spring”