I am le drowned. It has rained every day now for over seven days here. My micro-haus has flooded twice. Thankfully the landlord has engaged someone to come by and take a look-see at the place to see what the problem is. But yesterday and today were glorious even though it rained in the evenings. Rarely are there days in Florida, during the summer, that one actually likes being here. The last two days were such days. Gentle ocean breezes that broke the heat and humidity down, the cries of gulls overhead, the scent of honeysuckle, plumeria and confederate jasmine floating around corners and delicately blanketing you with their fragrance, as well as the fecund smell of damp earth. That’s the one thing I miss so very much about being in the country – the smell of earth freshly turned after a good hard rain. It is simply amazing, that scent. Bursting full of the hint of garden treasures in the future, it smells like nothing else. It smells like promise, like the future.

During the rush to get things off the flooded floor I began re-arranging the micro-haus. I figure if I am staying for another year, I might as well get it more to my liking than the former tenant had it set up. It’s not done yet, as a visit with my folks took precedent over completing the project, but it will get there. One of the things I have always wanted is a desk in front of a window by which to write, read and work. Now I have it. Granted, it looks out on an alley, but hey, I wasn’t specific in my desires for what view I wanted, lol! One of the kindest things a man I dated did for me, was to set up a writing table in a window overlooking one of his pastures. It didn’t work out, but that thoughtfulness meant quite a bit to me. One, because he listened to me, and two, because he went out of his way to set up something for me to use while visiting that brought me deep pleasure.

As I am re-arranging things, I am once again faced with the enormity of stuff that I collect. And I haven’t bought anything new for quite some time, it is all imported from the farm. Only affluence can create that kind of culture, one of getting stuff that has no real intrinsic utility value. Granted, a lot of my stuff does have value and could be utilized daily, just not here in this place. A lot of my friends and family keep trying to persuade me to get a larger place, but I am not convinced. “You can put all your stuff there!” they entice. Well, yes. But then I’d be paying even more than a storage unit fee to store my stuff, and I haven’t even been able to bring myself to get a storage unit. I think I just need to winnow down the stuff a bit more. It is difficult. Since I’ve been unemployed for brief periods of time, and also recently and unexpectedly widowed thereby losing additional income, I often think “What if I can’t replace it later?” From that point, I have to say, “Okay, so what if you can’t? Can you live without it? Can you live well and in happiness without it? Through this exercise I now have several boxes ready for the thrift shop. I suspect over time I will let go of more, and there will be more boxes. There are a few things though, that no matter how impractical they seem, I simply will not relinquish. This is a problem that only affluent cultures have. Many people never will face these kinds of choices. And they probably won’t miss it. It is those people I am trying to model my simplicity after, in a small way. What do I really NEED? I’m trying to make better choices with my space and my dollars.

There is also a promotional possibility in play at work, and one I’ve given a lot of thought to. This promotion would really be a life-sucking job. But the pay would possibly somewhat balance that out. It will allow me to move towards my goals in the case I don’t ever partner again. It will make me a better potential partner as well. It will allow me to pay off the little debt that I have and move towards the things which bring me true soul happiness. So I am trying to psyche myself up to giving up the next two to three years of my life in order to then go live the life I desire. In the woods, preferably somewhere cold(er), and doing something that I find joy in doing. I like my line of work, but there is little joy in it. I’d like to have the choice to do something that has value to me, and by making this choice to work longer, harder hours, I feel could open doors that otherwise are closed to me right now. At least that’s what I keep telling myself anyway. I know that life should be lived in the present, and that no one ever lay dying and wished they would have worked more. But I’ve struggled for quite a while now, trying to do what I really want to do and it is just not happening. Could I die in the next two to three years and regret my decision? I suppose so, since my husband died at forty and I’m older than that. Could my additional hours working leave me still alone later since it will preclude a lot of social activities? Possibly. I could also die next week without having been loved in a long time too, but I’m not running out tonight to see if I can find that just in case tomorrow doesn’t come. Besides, that’s not love 🙂 Again, these are choices less affluent cultures never have to face. Instead, they worry about finding enough work in order to feed their families, or sometimes just themselves. They don’t worry about finding a bigger place to put their stuff, they simply worry about finding a place to live at all. These things don’t just happen outside of our country, they are happening here, in the U.S., all of the time. In that light, I choose to be thankful for opportunity, thankful for health and thankful that I have a job at all. 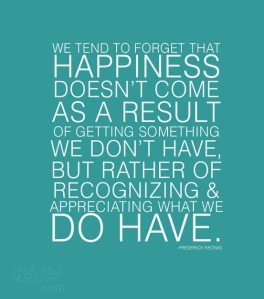 A reminder that even attitude is truly a choice.

I’ve been reading more lately, as my down time activity since work has been so hectic for three weeks. I highly recommend “The Architecture of Happiness” and “Signs and Seasons” – both embody a lot of my personal philosophy towards life.

And since I am on a philosophical bent these last several days, I’ll leave with with a new quote from Kahlil Gibran: