Yes, I know I said I’d be posting from the woods, and I didn’t.  Something about being out there made me wish to eschew the computer, a rare event in my life, since nearly everything I do revolves around computers.  Part of the issue was with my generators – one was more suited for phone and other add-on charging, and the other for running an electrical connection.  I misused them initially, so ended up with very little juice for the computer.  The other issue was more organic in nature.  I did not want to be on the computer.  I wanted to walk, to listen, to hike, to contemplate, to observe, to touch – to simply just BE. Rarely does reality trump my vivid and active imagination.  But that land?  Reality won hands down over anything I could craft in my mind.  Can I even do it justice in words and snapped photos?  Perhaps not, but I will still try over the next few weeks.  It is at these times I wish we did have a chip in our brains like Johnny Mnemonic and could unload all that we saw and felt into a translatable format for others to experience.  But alas, my mere words will have to suffice.

The first thing to be noticed is the stillness, the quiet.  Then, as you acclimate, the natural sounds come to the forefront.  Spring peepers, quieted by a foreign presence, re-engage in their chorus once they’ve decided there is no real threat from this new arrival. At first the stillness was disquieting to me and made me a little on edge.  That may have been related to my inerrant ability to do things incorrectly, and beginning my camping adventure by getting my car stuck on the property within the first hour of being there.  Remember I said I’m not stupid, most of the time?  This was one of those times.   The perfect camp site, and ultimately where I camped, I discovered not too far into the property.  But, as I am wont to do, I thought perhaps there might be an even BETTER one further down the road – the road which once past the perfect campsite no longer has a good rock bed base and is mostly beautiful, red, Tennessee clay, which at the time was heavy and wet from recent rains and snow.   My brain recorded “Stop now” about 45 seconds before I went too far, but I didn’t react in time and got Francesca the Fit thoroughly stuck.  Sitting there, digging worse ruts, I had the brilliant idea that if I could just get enough forward momentum, I could clear the wash ridge and perhaps get purchase to turn around.  So I gunned it over a wash and then was even more terribly stuck.  And that’s where I left the car, and began the fourteen trips, yes, fourteen,  uphill back to the original camp spot that I should have parked by, had I a lick of sense.  An old adage, “If you’re gonna be dumb, you’d better be tough” ran repeatedly through my mind during those trips, trust me.  When I called the property owner to advise I was on site, and sheepishly admitted my own folly, he was stunned, probably thinking “She hasn’t even been there an hour and is already doing dumb things!”  I’m sure he had second and third thoughts about my competency about that time, lol!  You just have to know me to understand how I get into those things.  Around me in person long enough, you begin to comprehend it isn’t that I’m lacking intelligence, it’s just that my enthusiasm and inquisitive nature often land me in places I really shouldn’t be.  Therefore, I’ve learned to be tough(er) than I used to be.  Still kind of a pansy at times though. 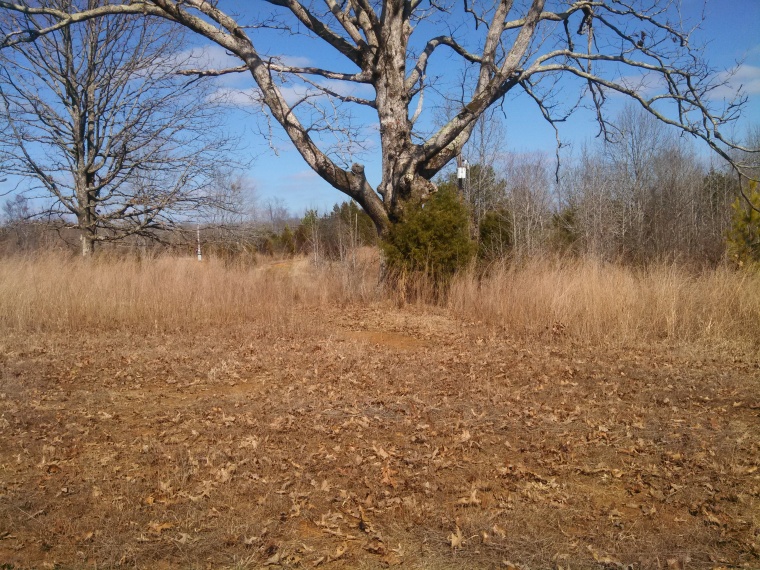 Thankfully the weather was perfect and the scenery spectacular, unhampered by my idiocy.   The site was atop a ridge that sloped down from all sides, ensuring a dry sleeping base.  The stubble was a little rough on my tent floor and the tarps, but no serious damage was done.  It took me several hours to get camp established, hampered by the trips back and forth that my genius behavior created.  It was a good work out though and I suffered no damage except to my pride.  I am very thankful that I threw my big tent into the car at the last minute, as a week in my tiny tent would have rendered me incoherent I believe.  Instead, I used it as my supply tent and created ample living room in my sleeping tent by not having to store all the cooking gear and such in there with me.

Camp later in the week

As I travel down the road to the gate, passing a couple of homes en route, a small cemetery comes into view on the right, surrounded by daffodils.  I really, really like daffodils, with their cheery faces and delicate scent.  Further down the curve the woods begin to get thicker until I arrive at the gate.  On the right, in the ditch beside the road, wild violets are scattered upon the varying shades of brown leaves like color placement for pop in a photo shoot.  Beautifully lavender-blue against the more subtle earth tone shades.  After closing the gate, I continue my drive, with woods thickening on the left and a narrow, elongated field on my right, with old grasses still rustling and trembling in the breeze.  I drive past more clumps of daffodils, pale cream with bright yellow throats, and then the standard all  yellow type.  Remnants of former lives dot the landscape on the left – a huge tractor tire, the shell of an old mobile home, a well cover, and ancient electrical poles with their abandoned lines lazily buffeted by the nearly constant breeze.  The  road curves around and then back, dropping off a bit in a downward slope on the left, and rising a bit on the right, until I come to the clearing on the right that will be the camp. A giant red cedar is on my left, and old oak trees on my right, mostly bare except for tassels of leaves still clinging to some lower branches.  Over the next week, these will play in the wind like muted wind chimes of paper, or perhaps polite applause in an abandoned amphitheater.  I will learn to distinguish their particular voice as distinct from other, more living sounds of rustling in the brush.  The hushed atmosphere feels ethereal, like being there could be an affront if one is not deeply appreciative and thoughtful of the surroundings.

Due to arriving a bit later than planned caused by rain delay at my first campsite along the way, coupled with my self-created hiking trips, I rush to get camp established before dusk falls, and to have a meal while still daylight.  Aware of the wet nature of the area prior to my arrival, a friend encouraged me to pick up wood on the way up, advice which I thankfully heeded.  Had I needed to start a fire with local wood, I’d have been hard pressed to do so in the first three days, it was so wet there.  Since it is really dark at night with no lights, I enjoyed each evening’s fire, as it provided warmth, cheer and something to stare into while pondering life and the universe.  I do not know what it is about fire, why staring into it can almost become a fixation of sorts, but it happens any time I am around one.

At least all was ready when the property owner, a friend from high school, arrived – perhaps a redeeming factor after my vehicular stranding, at least somewhat. Good thing I packed two tents, as his was wonky, the kids last having had it set up on the trampoline, lol!  Having not seen each other in nearly 35 years, it could have been awkward; however it was anything but so.  We caught up on each others families, what we’d done in our work fields (we’re both in IT) since leaving school, talked about classmates we’d remained somewhat in touch with, where our kids were attending or had attended college and general life flotsam and jetsam. Perhaps because he is a salesman, he has a natural ease with people that I often don’t feel.  He has all of the characteristics that should make this business venture successful if we are both able to pull off our parts – still somewhat up in the air as we talk over property ideals, suitable building areas, insurance requirements and the like.  I have a good sense of trustworthiness from him.  We’ll keep in touch as things develop, as I have some time before I can actually do anything, anywhere, regardless of where I end up and he has details to look over and see if they can be developed as well.

I’ll flesh  out our hikes on both properties, the differences between the two pieces, the amazing but varied beauty that each one presented, and some of my discoveries on my own hikes over time as I cull through photos and allow you readers to peer over my shoulder and experience my time there. The dream is alive and well, and now has a fleshy covering, whereas before it was just a slight skeleton in my mind.  Of course, it is not a sure thing even yet, and may never be.  But the experience was fantastic, soothed and refreshed my soul, gave me a renewed sense of peace, and truly was far more than I ever imagined it to be.  I am very, very happy right now. John Muir’s words are so apt here, as I begin to re-acclimate to my every day world, very reluctantly I might add.

Keep close to Nature’s heart… and break clear away, once in awhile, and climb a mountain or spend a week in the woods. Wash your spirit clean.

Although I am physically a mess from the trip – broken nails to the quick, scabs on my hands and legs from tangles with brambles, sporting spider bites up my neck, a slightly complaining left knee and lips that are cracked and peeling from becoming chapped – everything inside of me feels good, light, renewed and invigorated.  While I never doubted that the woods and fields are where I truly come alive, this trip anchored the fact that even without everything that we consider necessary for comfort, I am content with my feet on raw land, my hands able to reach out and touch living things, and the solitude that remote living provides is what the inner me thrives on completely.  Alone, I am recharged.  I never once felt lonely, only amazed by the beauty of things before, behind and around me.  I smiled a lot. I did some weeping as well, to let go of some hurts, and also in just pure, unadulterated thankfulness and appreciation for the natural world that surrounds me.  I did some hand-written private journal keeping, and some poetry work.  I sang Shema to the accompaniment of coyotes when Erev Shabbat fell, and nearly dizzied myself at times staring skyward at the amazing star sights. So to my friend who afforded me this amazing opportunity, thank you.  While it was only a camping trip externally, for me, it was the retrieval of myself.  That is a gift that is priceless.