Yesterday was a rare treat, a double-header with two of my daughters and my four grandsons, plus helping the third daughter watch shop by text 🙂  It was also a two restaurant meal day for me, which is exceedingly unusual.

In the midst of my ‘fake hiking & camping’ fun I had a birthday luncheon date with my middle daughter. In her favor, I did actually take a real bath and did not drag the Esbit stove to the classy waterside restaurant that she chose for having a birthday luncheon.  We had a nice upper level view and plenty of room for wiggly little boys to not upset other patrons.  There were air boats, kayaks, cigarette boats and pontoon boats to keep the boys engaged, in addition to finches, seagulls and….bees. Yes, I had bees in my food plate. It was a good opportunity to teach about the difference between bees (non-aggressive and slow to sting) as opposed to say, yellow jackets.  The bees climbed over my mandarin orange and strawberry spinach salad with curiosity, then moved on to the meat and fries before flying off and landing on my grandson.  No bees or grandsons were harmed 🙂  The next to youngest boy of the four is sporting a cast, having suffered a broken elbow inflicted by a drop knee move by his three-year-old brother. I’m glad I had girls, lol!

From there, we went to a couple of local parks to walk off birthday cheesecake, a glass of  Pinot Noir and the energy of two under three’s maintaining good behavior for more than an hour at the restaurant.  Little boys are naturally outdoors oriented it seems, full of running, jumping, stomping and ball throwing.  We did over an hour’s worth of walking, including off-road stroller fun, riding on Bubbe’s shoulders (called ‘flying’ by E-man), tried out a hammock for the first time in their young lives and left hot, sweaty tired little boys who went home with mom and crashed.  It sounds heretical to let you know that my backpack weighs more than my grandson and so this truly was a jaunt of fun.  And back packs don’t hug your hair and say “I happy!!” while bonking your cranium with a newly acquired cast forgotten in his excitement, reflecting your own dimples back at you in a beaming face. It was a beautiful and enjoyable day with part of my family. 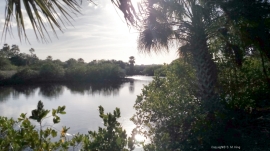 From there it was a short drive to my youngest daughter’s home and time with two more boys, including my youngest grandson who is now running everywhere and has a full set of teeth, and he doesn’t turn a year old until the end of this month!!  They are growing up far too quickly 😦  They decided to treat for pizza and everyone, including the baby, enjoyed it immensely.  Then me, my daughter and the boys headed to the near by park to walk off yet another meal.

I won bicycle duty, which consisted of helping the older boy on his bike with training wheels.  I’d forgotten how tippy those things are!  The bike helmet with a plastic mohawk was a nice urban touch (grin).  We did great the first time around the trail, even spying a fleeing bunny in the flashlight’s beam while successfully navigating a quick downhill slope and turn. I even got in some jogging along the way as the cyclist showed how fast he could pedal.  But the second round proved more problematic.  On approach we did well, but hitting the curve we were faced with three other walkers on the trail.  I got behind my grandson  to single-file it and had to grab the seat as he was gaining too much downhill speed.  My feet got tangled under the training wheels and the fun really began!  I catapulted over my grandson while managing to push him sideways into the dirt, missing the other walkers cleanly and strong-arming to avoid face planting on the asphalt.  He was fine, not even a bump or scratch.  The same can’t be said for me.  I don’t bounce quite as well as I used to. My right shin bone got caught under the careening  pedal, so I have a nice bloody gash there, some light road rash on  my left knee and elbow, but the best is my left hand.  I didn’t really feel any of it and had no idea I was bleeding until meeting up with my daughter going the opposite direction, who pointed out the blood on my white shirt.  Mangled the left pinkie pretty good and left a nice trail of drips until we could get the half-mile to the car where my first aid kit awaited.  My grandson was a trouper, holding the flashlight, pouring the peroxide, identifying the words ‘Band-Aid’ and generally not being squeamish.  This was unlike his mom, who made barfy, gagging sounds upon the inspection of the wound under flashlight.  Funny thing about that is she had more injuries growing up than the other two combined.  Good thing *I* am not squeamish.  We finished up on the playground and I got to swing, one of my favorite past times.  Boys are fun, if a bit more active and intense than little girls. They don’t freak out at bugs or blood, and they are all still young enough to express love and affection freely without embarrassment.  My favorite statement of the day was from my oldest grandson who explained to me that I should have his mom kiss my boo-boo, as when she does it for him, it makes it better right away 🙂

Which leads me to trail names.  I am fairly certain  mine will not have the word ‘grace’ in any association when the time comes. Maybe “Crash Test Dummy” would be more fitting? I’m enthusiastic, don’t whine, and accept my bumps, gashes, cuts and bruises with equanimity after a life full of them.  Currently in addition to my road rash I’m sporting double blisters on my left heel too, as my new hiking boots seem a little tighter on the left foot (what’s up with the left side thing here??).  But leukotape, blister care band-aids and different socks still enable me to put in some miles each day.  I’m simply not likely to win any accolades in the office next week, where my banged up body and high heels will be quite at odds.  Ah well, I’ll rely on my seniority in age and employment tenure to silence the laughter, except that I’ll probably be the one laughing the most. “Know thyself” is always a good place to start…

This old song was on my mind yesterday while holding little hands, feeling little arms around my neck, and watching little eyes take in the world. We teach by who and what we are; what we do – not always what we say. I’m not the best Mom, daughter or grandmother – I’m just the best one that I know how to be at where I am right now.  That is causing some of my family unease. This too, is part of life.  Learning that other people don’t always fit the molds that you have in your mind, or even the dreams that you want them to fulfill. Maybe my girls dreamed of an apron-clad gray haired lady reading stories and baking cookies instead of embarrassing them by hiking to the local grocery store, talking about herbal remedies, and primitive camping with coyotes howling in the background – and being excited and enlivened by it. I still bake cookies (sometimes), and I own a couple of aprons. I love to read to the boys, but I need a lot of quiet time on my own too. I love and support them in the way that I think that I should – honestly, intensely, and with complete confidence that they too, will find their way in life and make it their own.

I only hope that they allow me to do the same, and love me the same way today, and far into many tomorrows