Catchy and academic-sounding title eh? My brain works weirdly in sleep deprivation mode. I also love to make up words that have meaning probably only to me. 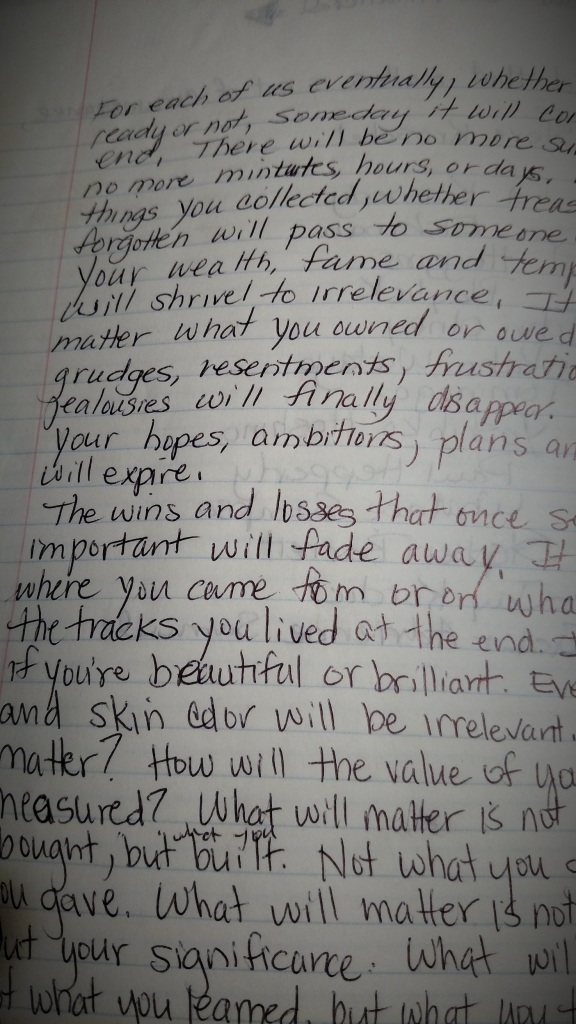 Last night was a late night (morning) working as the next in line is out for medical assistance for his partner. That left me in charge of herding cats and satisfying upper level customers in an IT tizzy. Diligently afterwards I tackled my continuing work of packing/sorting/remembering.I came across this in the back of a notebook that contained the notes taken on my husband’s death. Not the emotional ones, but the practical ones – mortuary, costs of death certificates, phone numbers, etc. My handwriting is never static in form, although I retain certain characteristics no matter my slant, font, cursive or printing. Running across it was like returning to an old friend. I wish I had written it. I know it is from a You Tube movie that used to be online. I played and re-played what was said in the movie, writing it down by hand. It had no credit noted on the page and for a moment I hoped I HAD written it. But turning back a few pages I found names of people in the margin and looked them up until I associated it with the true author, Steve or Garrett Kroschel (father and son); I am not sure to whom the actual credit should go. I hope you find value and depth in its simplicity as I did.

From The Beautiful Truth

For each of us eventually, whether we’re ready or not, some day it will come to an end. There will be no more sunrises, no minutes, hours, or days.

All the things you collected, whether treasured or forgotten, will pass to someone else. Your wealth, fame, and temporal power will shrivel to irrelevance. It will not matter what you owned or owed. Your grudges, resentments, frustrations, and jealousies will finally disappear; so too, your hopes, ambitions, plans, and to do lists will expire. The wins and losses that once seemed so important will fade away.

It won’t matter where you came from or on what side of the tracks you lived, at the end. It won’t matter if you’re beautiful or brilliant. Even your gender and skin color will be irrelevant.

So what will matter? How will the value of your days be measured?

A life lived that matters is not of circumstance, but of choice.

I experience people and places by the emotional impact of the thing. I sometimes cannot recognize a place until I smell it, or touch something about it. People are the same way. I may not be able to tell you their eye color or which way their hair parts; only how I feel in their presence, or how they smelled. Anyone else like that?

Yesterday, coming in from the humid and hot patio and entering the studio with its little hard-working window unit, I had some ‘feeling’ memories go rushing through my core. The scent of that little air conditioner and its chill across my skin reminded me of yesteryear’s vacation rooms as a kid, coming in from the hot sun and reveling in the cool. Of long days fishing with my girls on the pier and entering our little rented house on the beach with the air blasting. Of a place called “Palmpineoak” in the Ocala National Forest where we used to visit – an old Cracker style house with wooden floors, iron bedsteads and soggy tropical-smelling feather beds. It takes something that small to riffle through the card catalog of my mind.

I found a box of assorted photos – black & white, Polaroid, photo booth, professional styles. Pictures of people and places, times and spaces, living and dead. Photos of boys and young men I liked; photos of boys and young men who liked me (usually not at the same time; funny that, huh?), a declaration of love via snowmobile, written in snow from a boy smitten over summer vacation. How easily that word ‘love’ appears on photo backs and in notes from youth, before we understand the depth and breadth of what love requires and truly means. Love is a term I use now with the paucity of a miser, but when I do use it, I mean it with all of my being.

While sorting through additional life ephemera that tends to overtake me at times, cards from my late husband fell out, along with cards from my girls. How do you value those things? To anyone else who would come along after my passing, they’d be tossable things. I’m a continual note-taker, writing on everything, including things of value. I found my announcement of acceptance into Phi Theta Kappa, a monumental thing for me due to not entering college until post-divorce and in my thirties – and the envelope is written on. Pristine Smithsonian archaeological preservation will never be my style. I am an emotive and effusive human and it reflects in all aspects of my life. And this leads me to muse – can a pile of human evidence indicate what or who a person was? I wanted to be an archaeologist when I was younger; to dig through the detritus of lives of antiquity. I wanted to ‘see’ lives that were long since past. Tromping in the deserts and hills and digging through dirt seemed fascinating and interesting. I still feel the same way when entering an abandoned house, or finding notes in margins of used books, or looking at people’s trash by the road on pick-up days. I’m not sure if I am nosy, insatiably curious or what. I don’t want to peer into people’s windows, so it isn’t voyeurism. Perhaps I seek the common humanity in us all.

I’ve found a place to park La Coquille! I go to pick first and second location choice this weekend. If I were not working I’d love the nomadic thing. But some stability is required around which to form new daily patterns. This place meets the many competing needs required of the people and plans that formulate my life:

Nature – proximity to multiple parks, bike trails, hiking trails, canoeing and fishing
Country locale – being only thirty minutes from my birthplace, it still harbors closely the state of the countryside from years gone by
Proximity to work and competing family interests – those advancing ahead of me and those coming up behind me

Overall, La Coquille allows me to have in hand something for my rental dollars while preserving the future potential travels and locales I’ve bandied about. The best of both worlds, albeit a tiny world.

What remains to be seen is how well this found place provides me with the solitude and privacy that I require to recharge and be the best me that I can be, while also easing me out of hermitess status a bit. My move date is ratcheted up by a few days and I’ll be running to and fro a lot, in addition to working, packing, attending to familial issues and celebrating another year of living on the planet.

A friend’s comment recently jiggled loose this group’s existence from my memory banks where they lay unappreciated for many years. This song is so lyrically astute and vulnerable. Plus, Bob Dylan’s and my hair often could be exchanged 🙂 Perhaps one day, there will be someone I can sing this together with poorly, by a fire (did I mention I am a dead-on, hopeless romantic trapped in a pragmatic brain?)

And along the lines of the photo-pictorial background shots from the video, I’ve included an ‘evoloution of me’ photo collage from my wee years to my early 20’s for fun. Note the deadly serious photo for the HS yearbook. What’s up with that? LOL! I think I just wanted to be taken seriously for five minutes, and instead it is preserved in the annals of history as a look from a stern mother. I probably thought it was sexy and studious, one of which I was and the other which I was not, lol! (In case you’re confused, here is a hint: I graduated early, with Honors)

Are you dizzy yet? I am, hah! But that could be from sleep deprivation and stress.

Have a marvelous day in your life of choice!

~SE in a tizzy of pack and play

← Riding the Four C’s
The Intimacy of Moving →