Fire.  Winter.  They fit hand in hand as the chill nips your nose and toes and settles sometimes in the other parts of the body.  But my quest for fire (pardon the movie rip) was a simple one.  In my household, fire-making was a male activity.  It is accompanied by mumblings, portions of flammable liquids, charcoal and alcohol.  I marinated the steaks, fixed the accouterments and he made the fire. Usually fire-making was done in secret and its mysteries were not shared.  Only the successes were, as in “Now that’s a good fire!”  Its stages were announced incrementally: “I’ve got the fire going.”  This was followed up by “The fire is good and hot now.”  And finally, “I’m putting the steaks on the grill.”   Fire-making intimidated me because I don’t care for flammable liquids in the presence of something already burning, especially the eerie ‘whooosh’ that went along with their implementation.  I wanted to make a fire and cook a steak.  We often grilled on Friday nights, as Shabbat dinner was a relaxing and enjoyable time.  I have not made a  grilled steak since my husband died.  It was time.

Entering the mystical world of fire, formerly a man’s realm, was a little off-putting to me.  I am the only female in the family in my generation.  All the men in my family are master fire-makers.  It is a BIG deal, this making of fire.   Unfortunately, I never paid attention to the nuances.  I was usually off doing one of two things: caring for the younger family members, or with my nose stuck in a book.  Our primary fireside activities were fish fries and barbecues.    But sometimes my grandfather had a fire just to have a fire.  It was good for sitting by, and relishing a nip from the flask far away from grandmother’s watchful eye.  Fireside was also the most often stage for the  ‘pull-my-finger’ activity.  It was probably far safer outside than within the walls of the house 🙂  It was also a place for scaring an already scaredy little girl with stories.  And it once doubled as a good light by which to skin a coon by.  My Grampy was a character, that’s for sure.   As I matured (?), and married, the men continued to be the fire-makers.  Most of the time it was by a propane grill in the early days.  Not much to that one, turn on the tank and turn the knob.   But J and I used charcoal only, usually natural cut hardwood.  It smells heavenly, and makes little tinkling noises as it heats up.  I love it.  So today when  I got up and saw the rain-turned-slush-turned-snow, I decided I would make fire.   After all, wood fire and snow are a beautiful combination, right?  I was also determined to eschew the use of flammable liquids.  Sorry, they still frighten me.  I figured people had been making fire and cooking over it long before the advent of lighter fluid.   So I had a chat with our little round grill.  I peered into its rusty recesses to see if there were any instructions, nope.  Perhaps in the lid? Nada.  I briefly considered setting it by the road in the hopes that someone would toss a cigarette and create a fire; that seems a primary successful methodology for starting a fire in places that you don’t want one.   But since I wanted a fire, I figured that wouldn’t work anyway.  Onward I pressed.  I remembered that you want the fire to start hot and then make nice glowing coals.  And I knew that charcoal doesn’t just ignite poof, like say, paper or whatnot.   So I assembled my kindling, which consisted of newspaper twists, bits of cardboard from old boxes and some cherry tree twigs that had been drying in the house.   It must have been beginner’s luck, because my little pyramid of charcoal was soon surrounded by hot fire, and shortly thereafter began to glow on the bottom.  Yay! 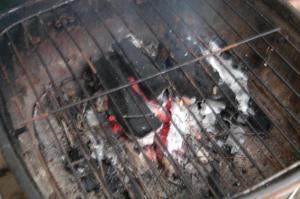 She can make fire!

It’s possible that  the wine chilling in the
steel tub in the ambient temperature of 35 degrees  did help though.

Everything came out delicious!
And so she was pleased.
In order to crown the evening with the proper joy, I located a nice table covering, a cheery candle and proceeded to set the table.  By this time it had stopped raining and returned to gracefully falling big huge snowflakes.
And  I sat down to eat.  It was…superb.  Not because I had been successful, made fire and cooked food so much.  But rather the beauty of the evening was that kind that takes your breath away.  Or if you are me, makes tears well up in your eyes.   Most people would see a table for one, and be saddened.  Yes, there was some I admit.   Here’s what you need to understand though.  I ate dinner far from alone, as I ate in the King’s courtyard.   The rushing stream of His creation gurgled cheerily.  A pair of cardinals flitted from forsythia to Althea and then back again.  A field mouse scurried through the white snow, his dark brown pelt a sharp contract against the white.  The hawk pair sent their recon cries one to the other as the twilight approached.  The falling snow whispered against the trees and house as it fell.   My little Jack Russell waited patiently at my feet for the fat tidbits post-meal.
And as the sun slid quietly down, I sang Shema to the hills and trees and stream, but mostly to my King.  Yes, life is  hard at times.  We suffer loss.  We experience doubt.  We grieve.  However, there are also moments of such intense beauty and wonder that you must immediately seize them, hold them, and savor them, rolling them around on your tongue like a crisp dry wine…and swallow deeply.  For if you do not, they will disappear like wood smoke in a mountain wind and be carried away to some other receptive soul.  Do not let them pass you by.  I for one, will not.  Carpe diem my gentle readers.  For we never know when it might be our last.  Waste it not.  Choose life.
~SE 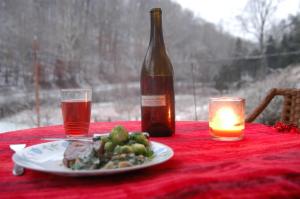 ← The Homestead Seedling of my Mind
Stuff, stuff and oh, some more stuff →

2 comments for “The mystique of fire, and dining in the King’s courtyard”